LaSalle Police Service Seize 700 grams of Cannabis Marijuana and $14,070.00 in Canadian Currency during a Traffic Stop on May 14th.

On May 14th, shortly after 11:30 PM, a LaSalle Police Officer on general patrol and conducting traffic enforcement on Highway #3 near St. Clair College, stopped a motor vehicle travelling 121 km/h in a posted 80 km/h zone, 41 km/h over the posted speed limit.
The lone male driver was found to have his drivers license suspended. During the interaction with the driver, the investigating officer made sensory and visual observations that led him to reasonably believe that Cannabis Marijuana was being unlawfully being kept within the vehicle. A subsequent search of the vehicle revealed that there was a substantial amount of Cannabis Marijuana along with Canadian currency stashed in various locations within the vehicle. A total of $14,070.00 in Canadian currency as well as 700 grams of Cannabis Marijuana and Cannabis by-products were seized which have a total estimated street value of approximately $7,000.00.
The male was arrested for possession of Cannabis Marijuana for the purpose of trafficking, contrary to section 5(2) of the Controlled Drugs and Substances Act and has a future court date to answer to the charges. He was also charged with offences under the Highway Traffic Act which include; Speeding, Driving while under Suspension and Driving a motor vehicle with Cannabis readily available.
LaSalle Police Service is unable to release further details at this time nor can they reveal the identity of the accused person as the charges are not yet before the Ontario Court of Justice.
LaSalle Police Service has maintained a high visibility including traffic enforcement as part of our effort to provide a safe community for its residents and visitors.
This investigation once again highlights how the LaSalle Police Service continues to keep our community safe along with how a traffic violation can quickly turn into criminal investigation. 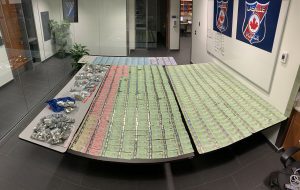