A 37 year Windsor woman is facing multiple charges after stealing a large truck from a worksite on Ojibway Parkway in Windsor just before 3:15 a.m., then leading police on a low-speed pursuit in LaSalle.

Windsor Police notified LaSalle Police Dispatch that a large white panel truck was reported stolen from the worksite moments earlier and was now headed towards LaSalle on Ojibway Parkway. An officer in the area observed the truck and activated their lights and siren to signal the vehicle to stop. The truck did not stop and police observed that the driver appeared to be a middle-aged white female.

The truck was driving at speeds generally under 40 km/h and weaving on the roadway and onto the shoulder, leading police to believe that the driver may be impaired. Additional police cruisers joined in the effort to stop the truck and attempted to box it in while travelling east on Edgemore Avenue. The truck stopped briefly then accelerated directly into the rear of a LaSalle Police Cruiser, causing extensive to it, however, the occupying officer was not injured. The vehicle’s large size made stopping it dangerous and challenging, and the officers backed off knowing that the truck was approaching a dead-end on Edgemore. The truck came to a stop the officers pursued the female on foot into a nearby wooded area where she was promptly located and arrested. 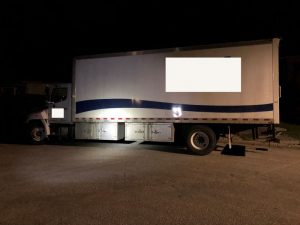 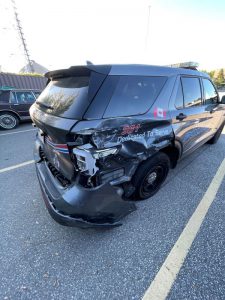