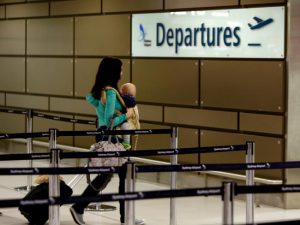 Last week, LaSalle Police Service were contacted by an RCMP officer from PEI. The RCMP officer advised that they were in the midst of investigating an incident involving parental child abduction. The officer explained that they were looking for a young mother who may have come to LaSalle over the past few days. The officer further indicated that the young mother had been in a relationship with someone that the parents did not approve of. The two young people at the centre of this saga are not married and do not live together. However, they did have a child together. The child is currently 8 months old. The young mother’s parents were firmly opposed to the relationship their daughter was involved in. After giving birth to the child, the young mother continued to stay at her parents home. As expected, the parents were less than welcoming of the biological father. The young mother who was being pulled and prodded emotionally, from different directions, decided that she no longer wished to be in her current environment. She decided to take her daughter and flee the province. She penned a note to the child’s father which he received after she left, explaining that she was starting a new chapter in her life, with the child, and that unfortunately he was not going to be part of the new plan. The biological father filed a complaint with the PEI – RCMP, who determined that incident fit the parameters of Abduction of a Child Under the Age of 14, contrary to Section 283.1 of the Criminal Code. The RCMP officers spoke with the young mother’s parents, and learned that she and the child had flown to Windsor, Ontario. The RCMP managed to track her whereabouts and discovered that she was residing with extended family members in LaSalle. The RCMP officer from PEI had obtained a Canada wide warrant for the mother’s apprehension. LaSalle Police officers assisted in the arrest of the young mother, and navigated her paperwork through the court system. Children’s Aid Society was called in to assist with the care of the child. The CAS worker determined that the extended family could continue to care for the 8 month old, before other family members arrive from PEI to bring the child back. The young mother was held in custody and will also be going back to PEI to answer the allegations levelled against her.