Members of the LaSalle Police Service, working from Monday October 19th to Sunday October 25th, were kept busy responding to 398 calls for service and activities including:

Halloween 2020 – Gatherings
The LaSalle Police Service would like to remind everyone to follow a few safety tips this year while we celebrate Halloween 2020. We’re all going to have to make some adjustments and follow the guidelines of our health officials in an effort to stay healthy and to limit the spread of COVID-19.

Any gathering has the potential to put you or your guests at a higher risk of infection.

If you are attending a Halloween gathering and may be consuming alcohol, cannabis, or other intoxicating substances, please plan ahead and arrange for a ride home

October 20th
Theft Under $5000 – Shoplifting
On three separate occasions throughout the day, LaSalle Police Service were summoned to Zehrs Great Food on Malden Road, LaSalle regarding persons shoplifting from the store. Police attended for these occurrences at approximately 8:00 AM, 10:00 AM and 2:30 PM respectively. The store was very lenient in these instances and requested no criminal charges to be laid. The culprits were cautioned for theft under $5000.00 and trespassed from the store for life.

It is a criminal offence to take anything from any store without first paying for the items before exiting. Many retail stores have high definition multi-angle video surveillance to prevent, deter and detect theft from their stores and Zehrs Great Food is no exception. They also employ a full time staff of loss prevention officers to assist in the detection of theft from their premises. Notwithstanding that theft is a criminal offence, it is never worth taking the risk. Please do the right thing and don’t steal.

Stunt Driving
An officer was conducting radar enforcement in the 2300 block of Front Road when he observed a motor vehicle travelling southbound on Front Road travelling at high rate of speed. The vehicle sped past several other vehicles on the roadway and was locked in on radar travelling 120 km/h in a posted 50 km/h zone. The driver was issued a Part III summons for the offence of “Driver Motor Vehicle – Perform Stunt – Speeding by 50 km/h or More, Highway Traffic act section 172(1). The minimum fine for a conviction of this offence is $2000.00. Due to the excessive speeding, the driver’s license was suspended for a period of 7 days after which he must pay a $281.00 reinstatement fee.

October 21st
Suspicious Circumstances
At approximately 7:00 PM a resident reported that they believed that someone had tampered with the lug nuts on the wheel of their vehicle. They explained that, while driving, the could hear a constant noise coming from the wheel and upon closer inspection observed that one lug nut was missing and three others were loose on one wheel while all the other wheels were in good order. The vehicle had new tires installed some months ago but the vehicle had been driven regularly and without issue since. The reporting person was of the belief that his vehicle had been tampered with but had no one in mind that would do this to them. It is recommended that when you have your tires changed to re-attend the install facility after driving approximately 50 kilometers to have them recheck the lug nuts to ensure they remain tight. Tampering with the lug nuts on someone’s vehicle is no prank! Should the wheel fall off at any speed it could cause serious injury or death, not only to the occupants of the vehicle but to whomever may be struck by the wheel after it dislodges from the vehicle. Depending on the circumstances, criminal charges could range from Mischief to Criminal Negligence for anyone caught doing such a thing.

October 22nd
Suspicious Circumstances
A resident from the 500 block of Maple reported that at approximately 8:00 PM, after returning from an evening bike ride with their dog, they entered into the back yard and believed that they heard someone walking in the leaves behind their shed. The dog began to growl and they went inside to call the police. While on the phone they heard another noise as well as their fence gate closing. Police quickly arrived in the area but were unable to locate the person who may have been in the yard. There was nothing reported to be missing in this instance. The reporting person was advised that it may be beneficial to have surveillance cameras and motion lighting installed in case of a similar occurrence in the future. The LaSalle Police strongly urges residents to ensure that you have locks on your gates and on your sheds to deter others from entering your property and taking things that do not belong to them. If you hear or see something suspicious, call police immediately.

October 23rd
Suspicious Male
Just after 9:00 PM, officers attended the area of Malden Road and Valiant for a theft in progress. A male was observed heading north on Malden Road after stealing a bike trailer from a front yard of a residence. The male was described as approximately 20 years old, wearing a black shirt and possibly carrying a black t-shirt. No other information was provided with respect to how he was travelling. While en-route to speak with the caller, officers observed a male matching the given description, riding a bike northbound on Malden Road nearby although the bike did not have a trailer attached to it. As both officers approached the cyclist, he quickly headed east on the trails behind Shoppers Drug Mart. The officers searched the area and trails by vehicle and foot extensively, but could not locate the cyclist. The trailer was not recovered.

October 24th
Two Vehicle Motor Collision: Howard Avenue
Just after 6:00 am, Police and Fire responded to the 6000 block of Howard Avenue for a report of a 2 vehicle motor vehicle accident with both vehicles on opposing sides of the road in the ditch. Investigation into the collision revealed that a white Dodge Charger was travelling north on Howard Avenue while a silver Jeep Liberty was travelling south. The Dodge crossed the center line into the southbound lane and collided with the Jeep. The involved persons were transported by EMS with injuries but none life threatening. The adult male driver of the Dodge was issued a traffic ticket for the charge of careless driving contrary to Section 130 of the Highway Traffic Act. The total estimated damage was $25,000. Both vehicles were demolished and towed by LaSalle Towing.

October 25th
Theft from Roots
At approximately 5:00 PM, Officers were dispatched to Roots located at the Windsor Crossing Outlet Mall for a male that had just left the store without paying for 3 leather purses. The total value of the three items was over $600 dollars. Store employees observed the male acting suspiciously as he entered and exited the store multiple times. On his last entry, he proceeded to take one bag off a front mannequin and then 2 more off of some hangers. He then exited the store and ran towards the trails along Highway #3. Officers reviewed video surveillance and the culprit is described as, ( at the time of the occurrence), wearing a black coat, red hoodie, black sweat pants and sneakers with blue laces. He was also wearing a black bandana and sunglasses. 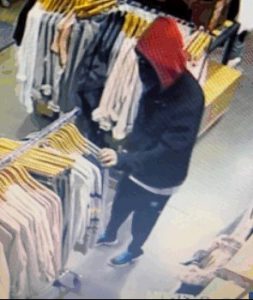 Anyone with information about these or any other crime is encouraged to contact the LaSalle Police Service at 519 969-5210 or anonymous tips can be made at Crime Stoppers at 519 258-8477 or www.catchcrooks.com